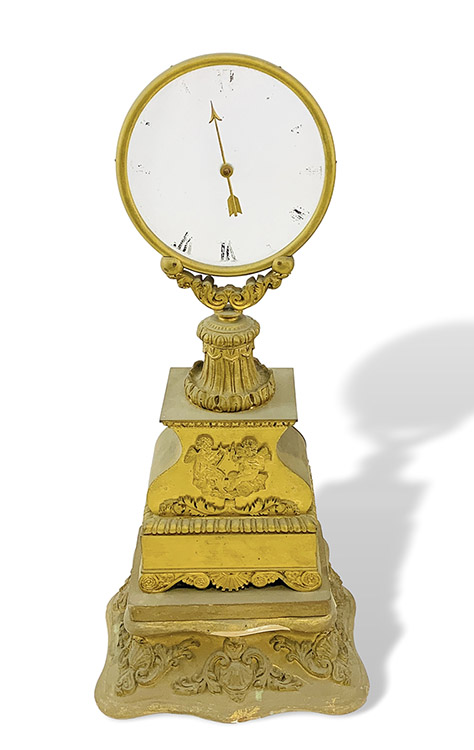 Every so often, something arrives in our saleroom that really gets us scratching our heads, and one such object is this very unusual clock. Whilst clearly beautifully made, the clock hand does not appear to be connected to anything, nor is there an obvious mechanism that moves the hand!

For the answer we had to look right back to the 1840’s, and a remarkable man that excelled in two fields, clock making and magic, which he uniquely combined to make his signature invention: the ‘mystery clock’.

Born Jean-Eugène Robert in Blois, France, the son of a clockmaker, he studied law at university, before returning home to follow in his father’s footsteps and become a clockmaker. At this point fate took a turn in the events, and when he purchased a two-volume set of books titled Treatise on Clockmaking, he received a two-volume set on magic called Scientific Amusements by mistake. Intrigued, Robert not only kept the books but pored over them and spent hour upon hour teaching himself the fundamentals of magic.

Already someone who enjoyed tinkering with gadgets, the young man immersed himself in magic and in addition to his clock making work he practiced all hours of the day. After taking lessons from a local amateur magician, Robert started to perform magic professionally at social events, but he was also a rising star in the horology world, and when he felt ready he moved to Tours, set up a watchmaking shop and did conjuring on the side.

Whilst performing magic at a social event he met Cécile-Églantine Houdin, the daughter of a renowned clockmaker. The two were married in July 1830, with Robert adding her name to his own to become Robert-Houdin from then on. When, much later, when the famous magician Harry Houdini (real name Erich Weiss) adopted the stage name Houdini, he was actually taking the name of his hero’s wife.

Robert-Houdin went on to become one of the most famous magicians and illusionists of the 19th century, transforming magic from a pastime for the lower classes (seen at fairs mostly) to an entertainment for the well-to-do. He was the first magician to perform in a tailcoat at a theater he opened in Paris. At the same time, he was still a full-time clock and watch maker. His interest in gadgetry, combined with his passion for illusion, led to his invention of the mystery clock.

So, how does a mystery clock work? Well, as Robert-Houdin would gladly tell you, it’s a trick.
The mystery lies in the movement of the clock’s hand. The workings are hidden from view, so the hand appears to move on it’s own. Clockmakers, not just Robert-Houdin, have devised many ways to achieve this illusion, and many are patented. Robert-Houdin used various optical tricks in his mystery clocks, including a rod that ran up through the ornate clock base and along the right of the top of the case, attaching to a screw that was connected to a second, invisible glass dial that turned behind the visible dial. His first mystery clock was the hit of the Exhibition of the French Industry of 1839.