2017 turned out to be another busy year for the Carriage department at Thimbleby & Shorland, with our 4 regular Reading Carriage Sales and the 2nd North of England Sale which has now become a permanent fixture in the calendar. A summary of the sales’ results is given below. 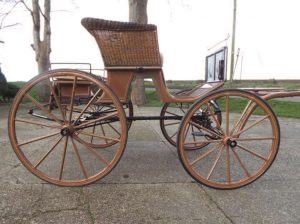 Basket Phaeton by Mills of Paddington

The March Spring sale started with a nice variety of vehicles. Forty-three were catalogued, and there were the usual late entries. A Wagonette Break built by the Wellington Carriage Co. sold for £3,750; an attractive Stick Back Gig by Brinsby & Sons of Long Acre, London and restored by Fairbourne Carriages fetched £3,300; a Box ‘Bus dated 1901 generated a lot of enquiries and sold for £2,850, and a Pleasure Driving Vehicle by Dartmoor Carriages of Devon made £2,150. A Wagonette built by the late David Fielden to suit a large pair or team, made £2,200; a Ralli Car by Stella Motor Co., Ashford circa 1909 made £2,400, and a Four-Wheeled Dog Cart by Croford of Ashford £2,700. Amongst the agricultural vehicles a medium size Farm Wagon in original condition made £360.
The highest bid in the Harness section was £1,700 for two sets of London trade working harness. A set of London light trade harness made £1,100, and a set of four steel dray chains made £340.
A large consignment of saddles was entered in the Tack & Saddlery section, with a 17.5 ins GP saddle making £200. 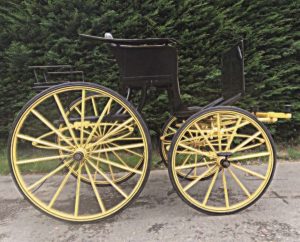 In Sundries, a pair of Lawton lamps with screw-in stems fetched £900; a pattern horn by Köhler in a wicker case made £350, and an all-brass milk churn £900. A sepia photograph of Lord Roundway driving his drag and team made £600. Three hand-made model coaches, from the same vendor and displayed in glass cases fetched £675, £700 and £800, and a book entitled The Romance of the Road written and illustrated by Cecil Aldin sold for £95.

The May Summer sale saw the inclusion of two large private collections, one from the late Bob Jones, which contributed to the over 1,400 lots in the Sundries section.
From the Bob Jones collection 2 complete sets of heavy horse pair harness made £400 and £470 and a pair of oval-fronted Pickering Bros. lamps made £190.
In the vehicle section, 55 carriages were offered and the one that created the most interest was the Lakeland ‘Tantivy’ Coach which sold for £9,000, well above its reserve. A Barrel-top Gypsy Wagon dating back to 1900 made £4,000 and a pretty Basket Phaeton by Mills of Paddington sold for £3,300.
A set of pony harness by Huskissons of Walsall fetched £1,500 and a Giddens trade set made £875.
Saddlery & Tack saw 400 lots entered including another large quantity of saddles, the best being a GP saddle by Paul Jones for £150.
The best of the Pictures, Models and Books were: a watercolour by W. H. Standing dated 1904 which sold for £310; a hand-made model of a Road Coach that went for £280, and a book entitled Austin Carriage Collection which fetched £72. 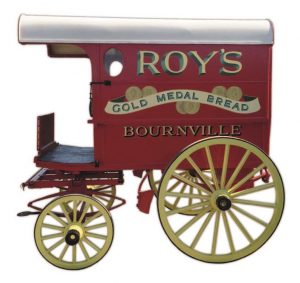 Despite it being a very wet day for our 2nd North of England Carriage Sale at Breckenbrough Equestrian Centre, near Richmond, on 6th July, this didn’t deter both loyal and new buyers travelling across the north of England, the Midlands and Scotland.
With just short of 40 vehicles, nearly 400 lots of sundries, plus harness, vehicle parts, saddlery & tack, pictures, models and books, there were about 900 lots on offer in total. The best price achieved was for a smart ‘Roys of Bournville’ Bread Van built in 1896, which had been recently shown with a pair of donkeys at the Balmoral Show, and fetched £2,500. There was a large influx of saddles for the Saddlery & Tack section with an Albion saddle selling for £240. Others made between £45 and £120. Hunt crops fetched between £30 and £50.

September’s sale was definitely the highlight of the year, the catalogue benefiting from many high-quality lots. The most notable were probably the consignment of thirteen carriages belonging to the late Bob Newman, which raised a lot of interest. The highest priced vehicle in the collection was a Show Phaeton by Lawton which fetched £10,800. Also from the same collection a Sporting Dog Cart by Mills & Sons of Paddington sold for £10,400 and another Lawton, a Spider Phaeton, made £9,000. As usual, the Gypsy Wagons brought in the crowds, with a full size Gypsy Vardo Wagon selling for £9,000.
We had a very small entry for harness but good prices were still achieved; amongst them a John MacDonald set of brown/brass breastcollar team harness for a small cob or horse sold for £540; a set of black patent /brass driving harness with a 24ins collar made £500 and a set of black/whitemetal working harness for a 14 to 15.2 hh made £480. The best of the other sections were: an axle with Warner wheels boxes and hubs at £210; an 18ins Albion show saddle £180, and another saddle for £150. A variety of turnout rugs made from £15 to £55. 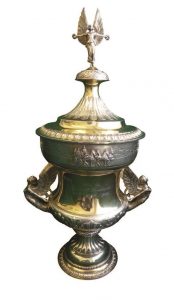 Five silver-gilt Show Trophies that had been presented between the Wars to Claud F. Goddard, the renowned horseman and whip, were also offered in September. A two-handled cup and cover by Goldsmiths & Silversmiths Co., 1929, inscribed “Richmond Royal Horse Show” sold for £1,650; a small 18th Century style two-handled porringer also by Goldsmiths & Silversmiths Co., London, 1927, inscribed “Imber Court Horse Show” made £600, and another cup and cover, this time made by Mappin & Webb, London, 1927, inscribed “International Horse Show Olympia London, 1931” sold for £650. The Mappin & Webb “Ostrich Egg” trophy, and the large Victorian ewer weighing 76 troy ounces, were both sold privately after the sale. 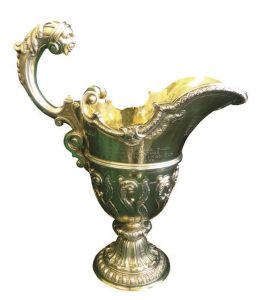 Another high-quality entry was a pair of rare, unrestored Holland & Holland Coach lamps. It was not a surprise to see these genuine lamps make £3,700. A single ‘Man-in-the-Moon’ Gypsy lamp with cranberry coloured shade and reservoir sold for £1,050. Of the unusual, a rare cast iron stable ventilator with weight and pull by Musgrave made £150; and a display of semi-state Royal harness pieces sold for £750. A pair of cast iron fire dogs made £220. A gentleman’s leather portmanteau by Insoll, Bristol fetched £400 and a copper/nickel silver coach horn by Henry Keet & Son, London sold for £280. 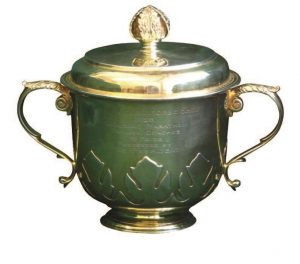 A cob-size patent Hackney driving saddle fetched £295; and a heavy duty hole punch fetched £300. A dealer’s whip and a Bow Top holly whip both made by Dennis Walmsley made £400 each. A leather Royalty breastplate with decorated brasses fetched £150.
In the Pictures, Models and Books section, a set of four prints by Thackeray Edwards sold for £280 and a picture by W. H. Standing entitled Going to Epsom, Tandem made £250. A Border Fine Arts model called The Vanner, a large scale model of a State Coach and a small ornament carousel each made £120.

One of a pair of rare Holland &Holland lamps
sold for £3,700

Finally, in November, there was the usual flurry of late entries in the vehicles section, one of which was a Dray painted by Bill Stephens, which made top price on the day of £2,850. An American vehicle know as a Rockaway originally from a family in Washington, USA and dating back to 1890, sold for £2,700; a silver Hearse circa 1920’s made £2,500, and a Swedish Phaeton sold for £1,850.
In the harness section, the best price paid was for a brand new set of pony/Shetland harness made by Jeff Dudley which made £2,500, whilst a pair set of Giddens harness to suit 14 to 15 hh sold for £1,380.
In the vehicle parts an old adjustable cart spanner made £270. Pairs of shafts sold between £50 to £140; carriage wheels from £85 to £100 and two Victorian corner hay racks made £150.
In the Saddlery & Tack section again we had a flood of saddles and some did well: a GP saddle fetched £420; a 15 ins Barnsby show saddle £160; a 17 ins Ideal dressage saddle £130 and an 18ins Stubben jumping saddle £120. Horse rugs of varying sizes made up to £45.
In a smaller than usual Sundries section the stand-out lots were two Blunderbusses; one by Archer and engraved London making £1,300 and the other by Baker engraved Royal Exchange fetching £1,500. A large top hat, size 9 by maker Armand Lammens sold for £250 and another size 7½ went for £230. A hat stretcher and bowler hat mould made £120. A 44ins Beaufort pattern coach horn by Hays of London sold for £120. We had a selection of good quality whips: a team whip by Flex fetched £420; and two holly whips by G. Holland made £320 and £300.
Other interesting lots were: a cordite bag which fetched £260; a leather Terrier bag £300; a hallmarked hunt flask £220; a walking stick/horse measurer £200; and a French military saddle £250. In the Pictures, Models and Books section for the 3rd time this year there was a picture by W. H. Standing sold, and it made £340; a painting of Hackney Baldwins Day Light fetched £260; a watercolour of a gypsy scene by artist Juliet Jeffery made £105, and a coaching panel painted by Cecil Aldin to depict the Liverpool Coach made £120. A child’s Victorian toy horse and carriage made £360. Two colour catalogues containing designs of horse clothing, bridles etc. purchased by a regular foreign client each made £120.

“The trade continues to be characterised by the old saying that quality will always sell”, says Thimbleby & Shorland director Chris Boreham. “Some of the prices achieved were very acceptable by any standards. There is no denying however that in places demand is weak. We are always very willing to talk to potential sellers about how we see the market.”

The first Reading Carriage Sale of 2018 will be held on Wednesday 7th March, with an offsite sale to follow, on the 6th April. Details of all sales can be found at www.tsauction.co.uk or phone 0118 950 8611.