2018 will be remembered as the year of the Dunton, Reading wagon. One of the finest such wagons to be offered for sale at a Reading Carriage sale, it kicked off the year in style. It was not the only notable vehicle to be sold in the year however, with a very original example of a late 18th century travelling chariot also making the headlines. Both examples of the continuing demand for exceptional items. 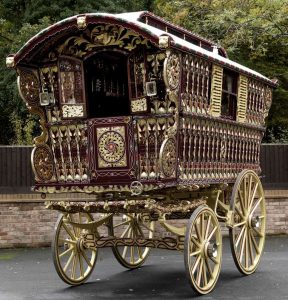 The first carriage sale of the year saw an impressive entry in the shape of a 1914 Dunton & Sons, Reading, wagon (55). It was an archetypal example of a high-bodied wagon, the body set inside the larger rear wheels, but taken to a new level in its finish. Every piece of wood had been carved and embellished and the owner, a private collector of such items and himself an undisputed authority on the subject, had ensured that in restoring the wagon to its original glory, no detail (or expense) was overlooked. The wagon made £84,000.
Also in the sale, a Roof-Seat Break by Mendyka of Poland sold for £8,850 (28); a Sporting Dog Cart (26) made by Fenix to suit a large pair or team fetched £3,300 and a Farm Wagon built by Peter Buck sold for £2,450 (4).

The Sundries section received a lot of good quality items including a pair of Mills of Paddington lamps with screw-in stems which achieved £1,800 (945); a pretty angel lamp from a Gypsy Wagon sold for £650 (947) and a pair of pony size lamps by Alfred Hales made £330 (1236). Selling to a funeral director, a pair of whitemetal rails for the interior of a Hearse made £650 (924), followed by a rare front coffin casket (944) from a Shillibeer Hearse which fetched £320. Not normally seen in such good order was a pair of fine Musgrave stalls with the metalwork and timber selling for £1,900 (1496). A pair of old framed prints showing WW2 scenes made £480 (1594) and a reproduction model of a Pickfords Pantechnicon made £250 (1668). 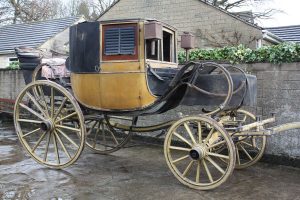 The day of the sale was blessed with a much needed change in the weather, turning into a beautiful warm day. Buyers came from all over the country and from overseas, all interested in items ranging from garden tools to elegant carriages.

The star of the ‘show’ was a Travelling Chariot by Coates & Blizard of Park Lane, London. Owned by the same family, the Wrights of Eyam Hall in Derbyshire, since it was commissioned and built, it had been in the museum for many years and carefully looked after by Caroline. Foreign phone bidders, domestic buyers and far-travelled clients all battled for ownership, which ended with the hammer coming down at £60,000 (920) to the intrepid bidder who had travelled all the way from Norway. A beautiful Siamese Phaeton by Mulliner sold for £10,000 (907) and an Arthur Cowley Bread Van entered by another vendor made £3,850 (911).

May – link to auction page 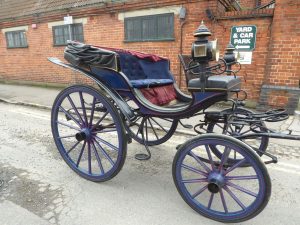 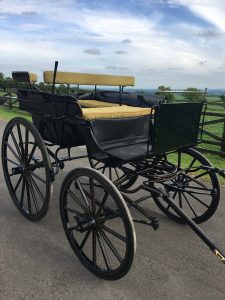 We were blessed with a glorious summer’s day in North Yorkshire which encouraged a large number of both new and regular buyers from across the north of England, the Midlands and Scotland to attend our third North of England Carriage Sale at Richmond Equestrian Centre, near Catterick.

In the Pictures, Models and Books section a signed artist’s proof of a hunting print by Lionel Edwards (331) fetched £60. A lovely original Victorian horse tricycle in good condition (357) made £130. Over 50 lots of books sold for reasonable money, including; Working Drawings of Horse-Drawn Vehicles and Restoration of Horse-Drawn Vehicles plus one other (432) £65; Coaching Days of Old England (414) £50; a number of Bailey’s Hunting Directory’s (416) £40, as did lot 445 Over the Grass and A Handful of Leather by Lionel Edwards with 8 coloured plates. English Pleasure Carriages and A Treatise on Carriages (443) sold above reserve for £30.

There were relatively few Sets of Harness on offer but some good sales were achieved, one being a pair set by Huskisson of Walsall to fit 15 to 16 hh (599) which made £1,000; another set by Huskissons (614) with a 21½ ins collar sold for £550; and a set of black/brass driving harness by Houghton’s Darwen with 19 ins collar made £500. In the vehicle parts a pair of hand-decorated wooden shafts (526) suitable for a barrel wagon made £130. A black dressage saddle by Barnsby in the Saddlery & Tack section (676) made £190.

In the Pictures section we had a couple of nice watercolours by H. Standing in 1911, commissioned by Joseph Lyons of Lyons Tea (1122/1123) each showing Mr Lyons standing by a harness horse with a ‘J. Lyons’ sash, each making £500. A volume containing 26 publications of the American magazine The Rider & Driver dated 1928 (1239) sold to a commission bidder for £400 and a very rare book dating back to 1662 entitled Markham’s Masterpiece by Gervase Markham containing ‘knowledge belonging to a Smith, Farrier or Horse Leech of curing all diseases in horses’ made £240.

Finally, November was a subdued affair largely due to the paucity of lots in the catalogue.
However there was a large number of entries submitted after the catalogue had gone to press, which is frustrating as it meant that it was thinner and thus less attractive than it needed to be. Selling anything is about marketing and telling the widest possible audience, so if something is not in the catalogue it makes this very difficult!

Lot 1056, a large Victorian picture of the Coat of Arms of the Worshipful Company of Coachmakers and Coach Harness  Makers, generated a lot of enquiries. On the day the bidding was between someone in the room and a phone bidder, eventually selling in the room for £980. And finally, a plate (1059) used on one of the London to Edinburgh Stage Coaches during the reign of King George IV, made £380.

Thimbleby & Shorland Director Chris Boreham says: “2018 has been a challenging year, but with some great “highs” to keep everyone buoyed up. The weak demand in places, particularly harness, has seen entries fall off quite dramatically. As a consequence the catalogues for the September and November sales were thin, and we have therefore decided to only have one sale in the Autumn/Winter going forward. In order to spread the sales out the May sale has been moved to the beginning of July. We will continue to have a sale in the North of England, but a bit later, in August.”

The first Reading Carriage Sale of 2019 will be held on Wednesday 6th March, for which entries will be needed by 31st January.