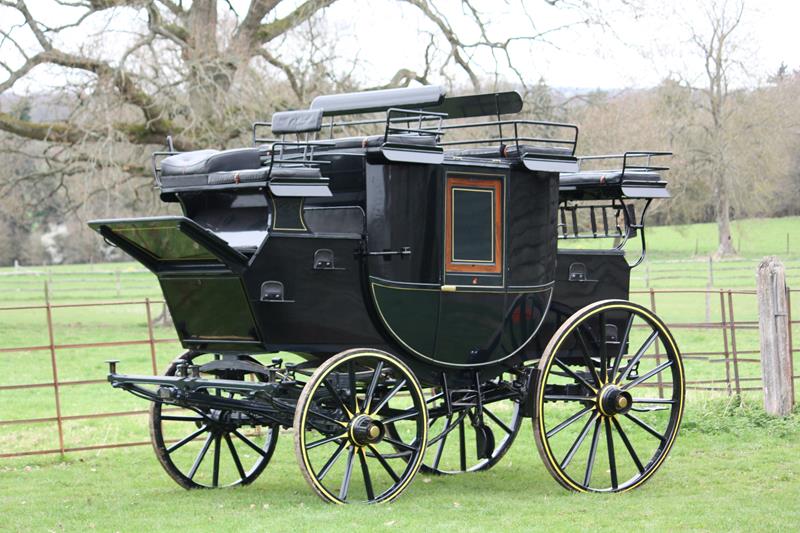 What could be more perfect than a beautiful spring day looking across to the Surrey Hills Area of Outstanding Natural Beauty in wooded countryside on the borders of Surrey and West Sussex? Such was the setting for the sale by auction of Frank and Jane Warrender’s collection of carriages and accoutrements, which took place on Wednesday 15th May. A knowledgeable and friendly crowd gathered to appreciate the years of effort and undoubted enjoyment that had been put into first accumulating and now disposing of the immaculately presented lots. Pride of place was of course given to the superb Park Drag by Laurie &amp; Marner. A coach that had won prolifically in the show ring since being acquired by Frank Warrender in 1971, it was estimated at £60,000 to £80,000, and this proved to be remarkably accurate as Thimbleby &amp; Shorland Director Chris Boreham brought the hammer down at £71,000 (plus 9% buyer’s premium, capped at £2,400). To the Warrenders the result could not have been more perfect, as the coach will be staying in the country, and not going abroad. The same is true of the rare Thrupp &amp; Maberly demi-mail phaeton, as that too was bought by an English collector, for just short of the top estimate of £15,000. The Estate Wagonette/Brake by William Wilson of Sheffield made £3,700 against an estimate of £2,000 to £2,500. 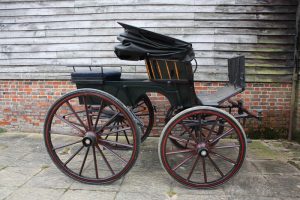 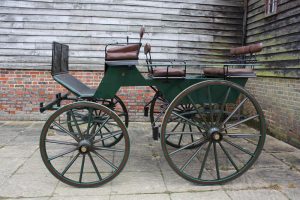 Determined competition from an online bidder meant that the buyer of the exceptional team set of harness by John MacDonald had to go to £8,800 before securing it. The jointed holy team whip by Geo. Schomberg went to the buyer of the coach for £1,120. The collection of high quality whips was another particular feature of the sale, with an Albiston dated 1896 making £600; a profusely carved whip dated 1893 £500; and a four-in-hand whip by Silks of Essex £440. A lovely Beaufort pattern coaching horn by Swain and Adeney sold for £540, and with Royal Ascot just round the corner there was lots of interest in a good black silk top hat with bids on the internet being finally seen off at £420. A 3 lens footboard lamp topped the trade at £1,100, closely followed by a pair of Lawton-style carriage lamps which made £1,000. A pair of good Brake lamps went for £870. The auctioneer’s hammer came down on a set of black/brass tandem harness by Turner Bridgar at £820, and an internet buyer secured a smart set of brown/brass pony harness for £800. Internet buyers also secured a saddle horse by St. Pancras Ironworks for £740; an adjustable carriage hub spanner for £220; and an unusual framed and glazed poster of Members of The Coaching Club 1877 for £580. A pair of black patent collars with brass hames made £580 and £560, whilst an unusual folding carriage ladder was sold for £440. Pairs of harness brackets by Musgrave made from £150 to £220. 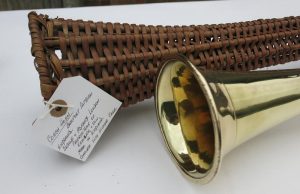 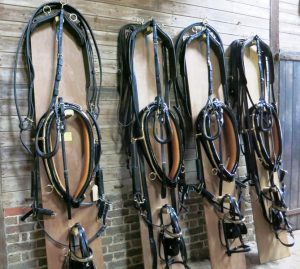 Of the lots included in the sale by permission of the Warrenders, an exercise vehicle/wagonette sold for £1,750; a traditional Victoria made £1,200; while a set of Geoff Dudley pair harness went for £1,750, and a pair set by Ideal for £790. 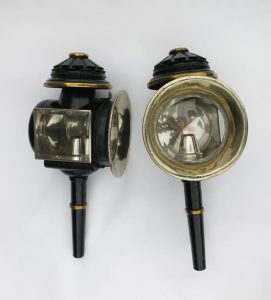 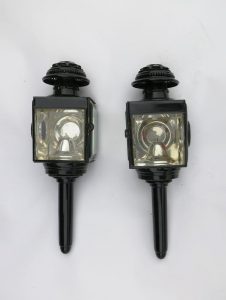 “ What a pleasure it was to conduct the sale for Frank and Jane Warrender, in such a friendly atmosphere and with such a successful outcome. The beautiful weather was the icing on the cake.” said auctioneer Chris Boreham. “An on-site sale such as this is without doubt the zenith of auctions, in the same way that Country House sales are in the fine art and antiques field. The internet also made a big difference at this sale, as  buyers could bid with confidence knowing the provenance of the lots.” 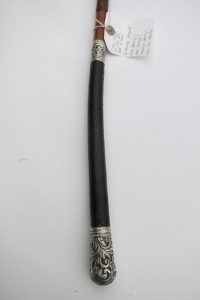 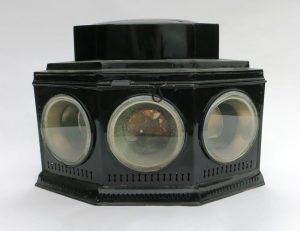 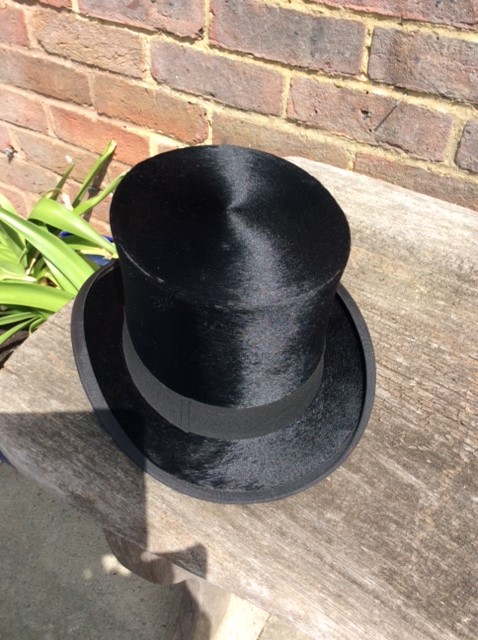 Thimbleby & Shorland are auctioneers based in Reading, Berkshire. They specialise in the sale of horse-drawn vehicles, holding 3 sales a year at their premises and 1 near Richmond in North Yorkshire, as well as on-site sales across the UK. Chris Boreham may be contacted by email chris@tsauction.co.uk or by phone  07760 888543.
Frank Warrender is a founder member of the Road Club, a club that caters for anyone associated with or enthusiastic about the art and history of coaching. It has members from all over the world and meets regularly at a London former coaching inn, The George on Borough High Street.